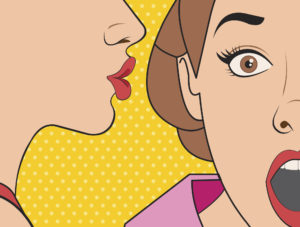 Yes, technically you might gain a bit of weight after breast augmentation. This can be due to the added weight of the implants themselves. But it’s unlikely you’ll gain a significant amount of weight after the surgery unless you dramatically increase the amount of food you eat or stop exercising entirely afterward.

How much weight can you expect implants to add? Very little, although the exact weight depends on the size of the implant. For example, 100 cc of saline weighs about 0.21 lbs and 100 cc of silicone weighs about .23 lbs. A pair of 300 cc silicone implants would weigh around a pound and a half, if that.

Getting Breast Implants Ruins Your Breasts

The cautionary tale about breast implants seems to be this: they will ruin your breasts. People often claim that breast augmentation will interfere with sensation in the nipples or make it so that you’re completely unable to breastfeed.

There are some kernels of truth in those statements. Some people do temporarily lose sensation in the nipples after breast surgery, but the majority of women regain feeling. Breast augmentation can interfere with the milk ducts and affect your ability to breastfeed. But that depends in large part on where the surgeon places the incisions. If you want to be able to breastfeed after your surgery, that’s something you should mention to the doctor beforehand.

You’ve heard of “mommy brain,” when women say that they feel like they can’t concentrate or remember things after having a child. But could there be “breast implant brain”? Some people do claim that breast implants interfere with concentration or cause memory loss. Worse, the internet rumor mill seems to be spinning pretty quickly when it comes to the topic of implants and memory loss.

But, there haven’t been any large-scale, well-designed studies on the subject. In fact, there’s little evidence aside from rumors and hearsay to suggest that there’s any link between implants and cognitive decline. The Food and Drug Administration has thoroughly examined the matter of breast implants and has published a consumer handbook on them. Although the booklet lists the common complications caused by implants, it makes no mention of memory troubles.

Breast Implants Glow in the Dark

Here’s a weird one that might actually be true. If you stand in a dark room and direct a flashlight at your implants, they will appear to “glow.” The implants technically don’t glow in the dark, since you still need to point a light at them to create the effect. But it’s something interesting to know about them.

Breast Augmentation Can Be a Tax Deduction

While the deduction won’t work for the majority of businesses or careers and might get you audited by the IRS, if you can prove that it was a necessary business expense, you might be able to pull it off. For example, there was one case where the IRS ruled that the breast implants a female performer received were a “stage prop” and necessary for her to do her business, not something she got for personal reasons.

What strange stories have you heard about breast augmentation or implants? To learn more about what’s fact, fiction and what’ just strange enough to be true, call 281-484-0088 to schedule a consultation with Dr. Paul Vitenas, a leading breast surgeon in Houston, Texas, today.